skip to main | skip to sidebar

Hey everyone,
The Scentsy and Usborne Book orders have arrived!! I will be getting them out to you in the next couple days. Thanks to everyone who ordered. It's so nice to have friends that you can count on!!
Posted by Cami and Jason at 9:13 AM No comments:

Hey everyone,
I just wanted to let you all know that I am having another Scentsy and Usborne Book Open House this weekend. It went so well last year, I decided to do another one. It is perfect for those of you who want to start Christmas shopping early. Cameron loved the books we bought him. And of course, I indulge in Scentsy stuff. So if you want to come join the party, it will be at my house this Saturday, Oct. 10th from 2-4 p.m. If you can't make it, but want to order some stuff, here are the links to my parties:
www.scentsy.com/kopenshaw
www.ubah.com/HOS155123
Hope to see you there!
Posted by Cami and Jason at 6:05 PM No comments: 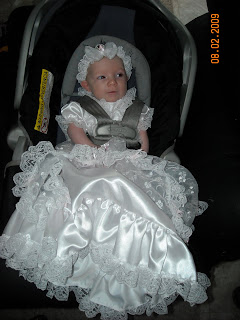 Here are some pics of Lydia's blessing. Her blessing was in August. We had a lot of family come, including Jason's mom all the way from Arizona. Lydia was so good during the blessing. She didn't make a peep. And she looked like an angel. 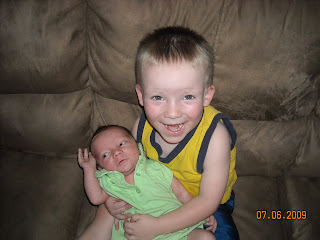 Cameron loves holding Lydia. He is always asking me to take a picture of him holding her. 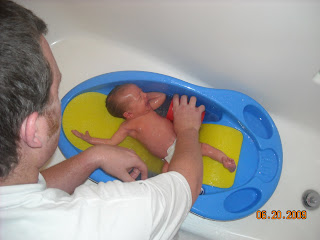 Lydia doesn't love her bath yet. But last night, I did give her a bath and she cried only a little! 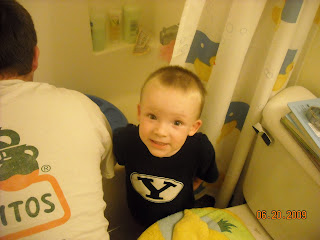 Cameron likes to help us get Lydia's bath ready. He likes to help fill her bath and get her shampoo ready. Notice his "BYU" shirt. We aren't necessarily BYU fans, but we got this shirt, and the first time Cameron put it on, Jason said "this is BYU". Cameron said "B Y Me?" Jason said "No BYU." And again, Cameron said "B Y Me?" So that's what his shirt is called now. B Y Me. 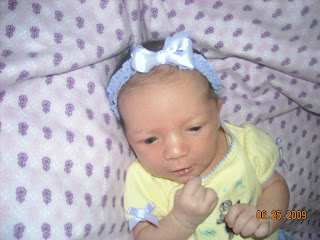 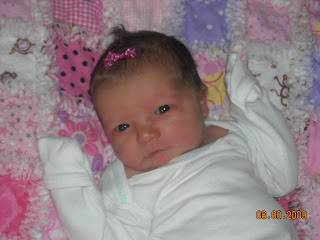 Introducing the newest member of our family, Lydia Ann Barber. She was born on Sunday, June 7, 2009 at 6:50 p.m, at Mountain View Hospital here in Payson. She weighed 7 lbs 8 oz and was 20 inches long. She has a head full of dark hair, which really surprised us. Cameron was pretty bald, so we thought maybe that trend would continue. What a surprise! She is doing really well. We stayed in the hospital until Tuesday, and have been at home relaxing since then. I have 12 weeks off from work, so I will really enjoy my summer.
The delivery was good. I started feeling contractions early on Sunday morning. By about 2:00 p.m. we decided to go in. I was at a 4+. I had an epidural, which slowed my contractions, but when the doctor came in and broke my water, I dilated fast. I only pushed for about 15 minutes (compared to the 1 1/2 hours with Cameron.) So, I was only in the hospital for about 5 hours before she was born. It was great.
Jason was there and was a great coach. He took care of me, made sure I was comfortable, and helped me focus when pushing, etc. He's the best. My mother-in-law was also there. She came up on Thursday night, and she and my father-in-law will be here for another week. They have been a big help around the house (they cleaned my entire house while I was in the hospital!), and have definitely helped Cameron stay entertained, and have really helped him adjust. My mom was there too. We didn't know if she would make it or not. She drove home from a fishing trip in Idaho that day, but she made it before the doc broke my water. Then my sisters were there too: Miranda was there most of the time I was laboring, helping to take care of me (she's a labor nurse at the hospital). Sami was there, and Krista barely made it from Vegas in time. The only sis that wasn't there was Hailey, because she was in Oregon visiting her in-laws. I had a really good support group. (3 labor nurses in my family: my mom, mother-in-law, and sister, so they really helped take care of me.)
Cameron has been an awesome big brother. He is very loving, and already protective. We had to take Lydia to get a bili test yesterday, and after Jason left with Lydia, Cameron started crying, saying "Bring home my Lydia." I reassured him that they would only be a few minutes, and he was ok after that.
I am posting a few pics of Lydia. There are also a couple professional ones that you can check out on the web. It's at http://www.hospitalportraits.com/. You can see her pics there. There are 2 of them. Just click on "Lydia B" (the pics are listed by birth date.)
We are doing well, and wanted to share this with all of you! 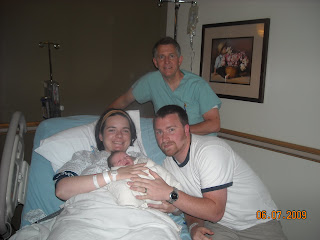 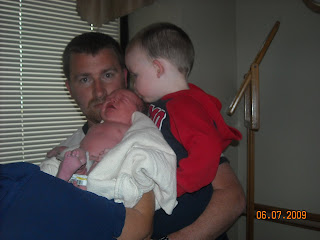 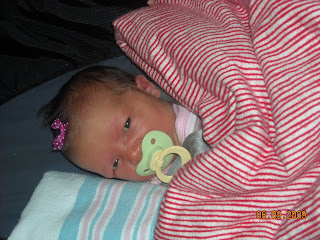 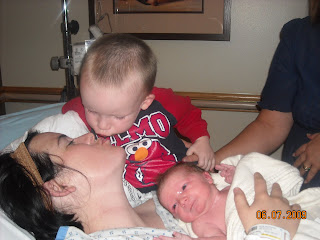 Yes folks, it's official. Jason is a licensed Radiology Technician!!!! Three cheers for Jason.... He finished school at the end of April and studied hard for his board tests. He's been reviewing for the past several months. He took the test on May 2. I think I was almost as nervous as he was. I paced around the house, and even Cameron said a prayer for his dad! He received a prelimanary score right after the test, and got the official notice last Friday that he passed and is certified! We are so proud of him!!! It's been a lot of work, but it has paid off. He got his certificate in the mail yesterday, and I think we will frame it. I don't know where we will hang it, but it's definitely worth a frame! Now he is focusing on getting into the MRI program, which is also through Weber State, and will be another 3 semesters, but when he is finished, he will have a bachelor's and be certified as an MRI tech, which is what he eventually would like to specialize in.
We are so proud of Jason, and want to share this news with everyone! We love you Jason!!!!!

I had to post these pictures and tell you about Pizza the Bear. Cameron's Nana (Jason's mom) came to visit in March and she brought Cameron's little cousin Marly (Jason's sister's girl.) While they were here, she took Cameron to Build a Bear Workshop in Orem. This was the first time we had been there. And it was a lot of fun! I think Jason and I had as much fun as the kids did, looking at all the stuffed animals and outfits. Anyway, Cameron got to choose his animal. He chose a black bear right away and he helped the girl put the stuffing in it. He put 2 little hearts in it, one that Nana kissed and one that he kissed. Then we looked around for the right outfit. They had so many to choose from. We finally decided on some jeans and a hoodie, because hoodies are Cameron's favorite. That's all the accessories that he wanted. So we went to the computer to name it and get a certificate. When we asked Cameron what he wanted to name it, he replied "Pizza." We laughed, and then asked again. We asked him probably 4 or 5 times, and each time he said "Pizza." So we decided that would be the name for his bear. So he officially brought home "Pizza the Bear" and they have been good friends ever since. He sleeps with Pizza every night. Below are some pictures of him and Pizza, and also some of him, Pizza, and Marly taking a nap. Thanks again Nana for the fun weekend! 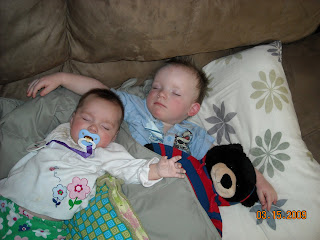 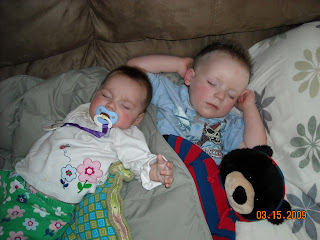 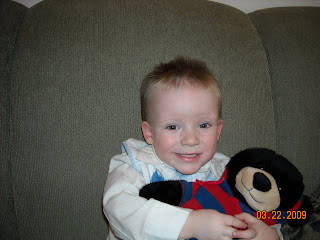 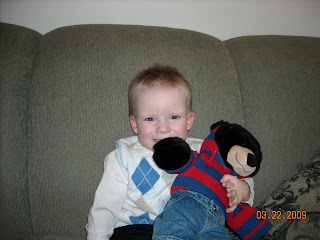 Posted by Cami and Jason at 3:25 PM No comments:

Cami and Jason
Jason and I met in Hong Kong on our LDS missions, and were married on Sept. 20, 2003 in the SLC temple. We have a boy who was born in Nov. 2006 and a girl who was born in June 2009. Jason finished his associates degree in radiology technology. He has now gone back to school to get his bachelors in MRI technology 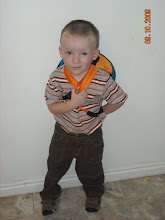 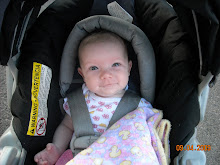 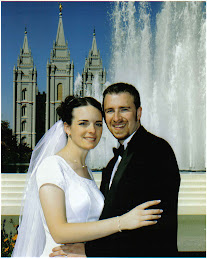